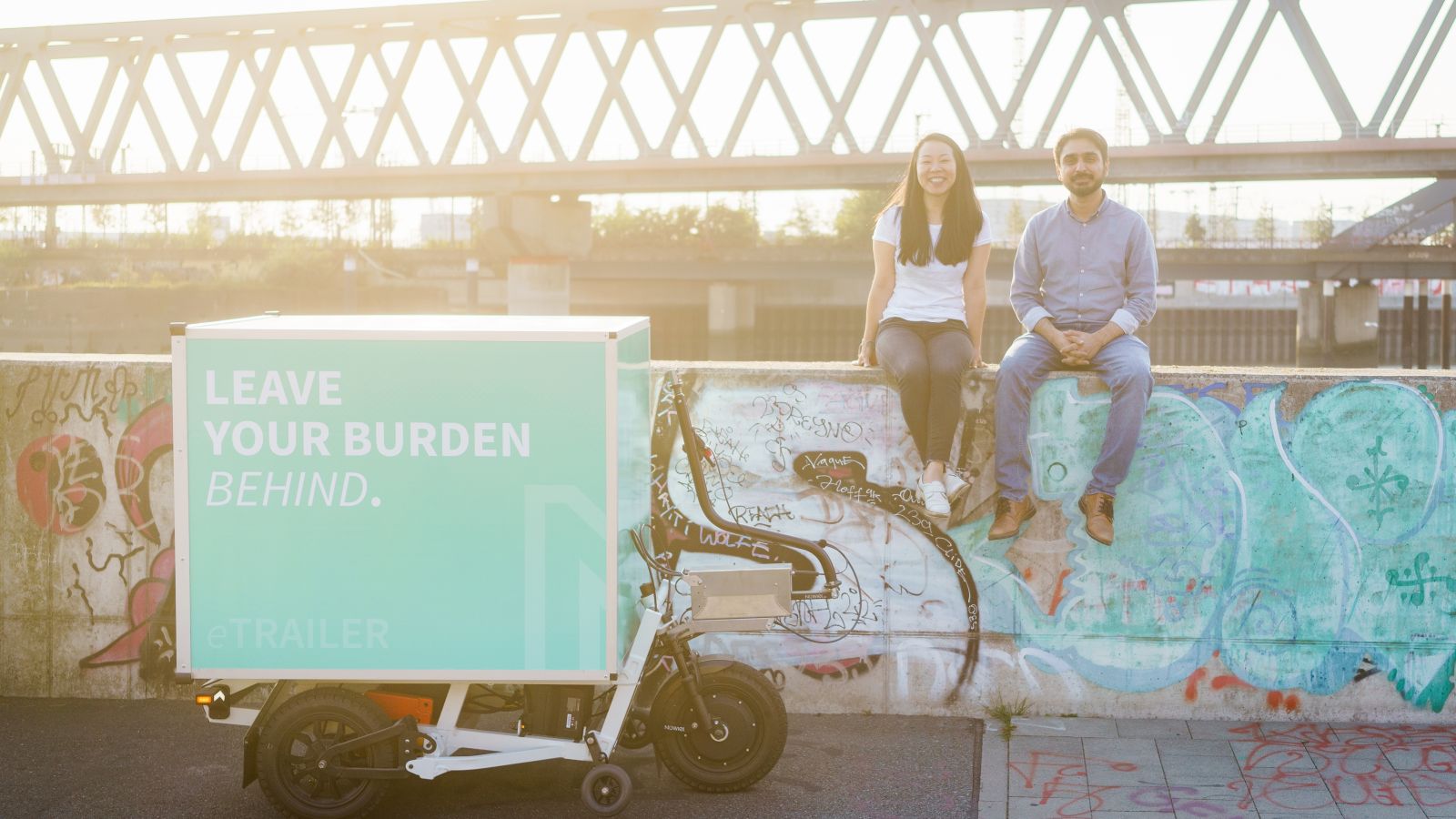 The Hamburg start-up Nüwiel wants to make mobility in the city more environmentally friendly and sustainable with its intelligent bicycle trailers designed for transportation. Motorised load carriers do already exist, but the intelligent technology of the three young Hamburg engineers Natalia Tomiyama, Fahad Khan and Sandro Rabbiosi is utterly unique in this respect. “Nü”, by the way, is Low German for “new”. “Wiel” is the Dutch term for “wheel”.

Challenge: Transport of heavy loads in the city

People who cycle through the city, not only exercise more than car drivers, but they often reach their destination faster. But what if you want to transport heavy loads over long distances? The three founders’ vision: City transport is up to 50 per cent faster than by car; there are fewer traffic jams, less noise and less air pollution.

The solution is just as simple as it is ingenious: an electric powered bicycle trailer that reacts to external conditions to support and relieve its driver. The intelligent trailer can easily be coupled with any bicycle. Sensors measure everything, be it uphill or downhill and whichever load the trailer carries. They assess the distance between the bicycle and the trailer and send a signal to the brakes or the engine via the control system. The electric motor then suitably provides more or less thrust or brakes on downhill terrain. This is ensured by a triple secured braking system that works even with an empty battery. The highlight: Charging the battery can be done by connecting it to an ordinary power outlet or through the cyclist’s pedalling.

Nüwiel’s founders come from the start-up dock of the Technical University of Hamburg Harburg (TUHH). In 2016, they founded their business. Many components are developed and built by the team right in the University, also in an innovative manner, by 3D printing. They convinced people with their sustainable idea and benefited from regional funding programmes such as EXIST, InnorampUp and Climate-KIC.

In the future, bicycles will play an even greater role in transportation. The fact that one of the largest logistics companies in the world, UPS, has equipped its bicycle couriers with Nüwiel’s trailers in both Hamburg and Berlin, in the meantime, shows the Hamburg founders’ keen sense of intuition: Their innovation meets the Zeitgeist. Nüwiel is still only focusing on B2B, especially on the logistics sector. Yet soon they will be offering the innovation to private customers – for example to shops or to transport precious cargo: their own kids.

Hamburg launches "Give a Gift of Culture" at Christmas